So when I had the opportunity to buy one of the communion tables built for the recent General Assembly of the Presbyterian Church (USA) I jumped at the chance.  I gave my best doe-eyed look to my husband, and told him we really could use it in the back.  I’m pretty sure it wasn’t the doe-eyes that won him over, but now it sits in our backyard.

The table was made out of our Pacific Northwest native wood, the Douglas Fir, the Pseudotsuga menziesii .  Its scientific name is derived from the pseudo prefix because the Doug Fir isn’t really a fir tree; the menziesii come from the name Archibald Menzies, who classified the tree before David Douglas, who named the tree after himself.  So you could say the table isn’t what it seems.

I wrote the communion liturgy that was used for one of the services at the table during GA.  The preacher/presider that day chose not to say all the words I wrote; I believe they did not suit, theologically-speaking.  I was a little miffed, to be honest.  But then I remembered it is a table of grace.

The table was transported from the Oregon Convention Center to our home a few miles away because of the strength of many and the generosity of a friend, who provided both muscle and pick up truck.  It is a table of friendship, too.

Its debut at our home was for a potluck dinner for all of us who were on the steering committee that provided hospitality for the General Assembly, and on that beautiful Thursday night, it was laden with wine and lemonade and iced tea and brats and chicken and pork and watermelon and crudites, and laughter, and stories, and gratitude.  It is a table of abundance.

Our child protested the arrival of the table in our small backyard – it takes up space she plays in.  It is a table of inconvenience.

But I love it.  I love where it has been, and who has stood behind it and broken bread and poured the cup.  I love who has gathered around it, and who will gather around it.  It is the holy in the ordinary, and I am reminded that the holy calls me to gracious, and generous, to be a friend.  I am also reminded that, like the table, the holy can be inconvenient at times, nudging us to let go of grudges, to rely on loaves and fishes, to find a way to squeeze one more person in.

It needs another coat of lacquer, according to its builder Michael.  A little care must be given for it to survive the long haul, not unlike all of us. 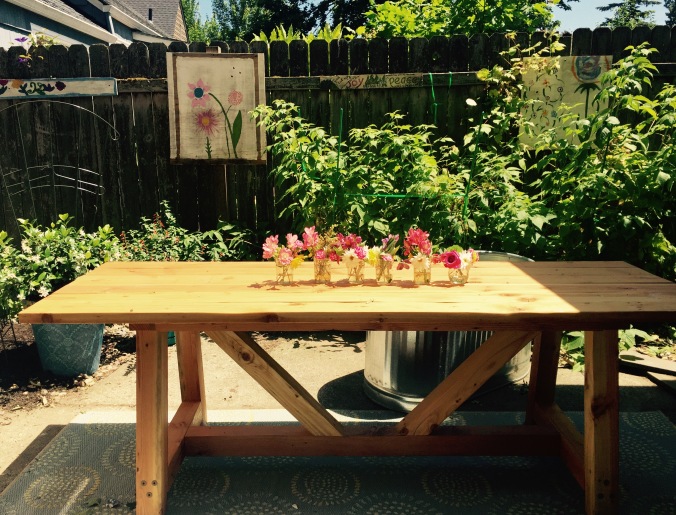 5 thoughts on “The table”