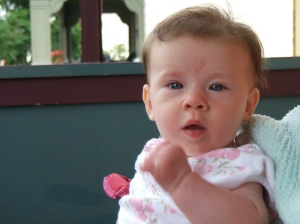 You were who you were from the beginning
Tickling me in the womb,
Reluctant about change when it was time to be born.

But there you were.  Pink and whole and glorious and terrifying.

Now I think of you in blues and browns
And gray, your favorite color
(which I hope does not mean you’re depressed, merely independent)

Ten is turning out to be a delightful age, and I thank you for
those conversations we have as you learn to hold your own with your rather verbal parents;
for those questions you ask, like do I remember the places I was when really sad things happened like 9/11 and Sandy Hook

Watching you navigate the undulating landscape of approaching tweendom
(God help us all, literally)
And seriously, your vocabulary.  When did you learn all those words?

We’re doing all we can to help you dig those roots and sprout those wings
And as it turns out, all we really need to do is stand out of the way.

Words are so inadequate for love. 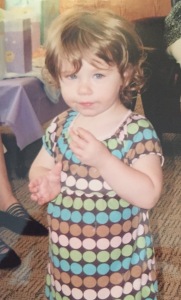 It’s just one of those ministry days.  A meeting here or there, a little pastoral care, some reading to prep for class, checking the calendar to make sure I’m not missing anything.  And two encounters with homelessness that have gotten me to thinking but not drawing any conclusions.

Our congregation participates in a Portland project allowing people experiencing homelessness to sleep in their cars overnight in our parking lot.  It’s not a great solution; it’s a pretty terrible one, but sometimes it’s the best choice some folks have.  We work with a shelter that provides a temporary “home” for families and helps them find more permanent homes, and today I met with a family that will be our parking lot guests until a space at the shelter opens.

If you met these people at McDonalds or Safeway, you wouldn’t think twice about where they lay their heads at night.  A mom, a dad, a rambunctious two-year-old boy, a sweet girl almost one and almost walking.  They were on their way to renting-to-own a house; turns out it was a swindle, and they lost all their money.  They’ve been sleeping in their car for six weeks.  They go camping when they can so they can stretch out in their tent and let the kids run around outside.  Mom and Dad are the biological parents of both kids.  He’s had the same swing-shift job for three years.  She is well-spoken and a very attentive and patient mother, taking classes. And they call their Xterra home, at least for now.  We’ll provide them with a porta-potty, a designated parking space, access to showers and laundry, and prayers.  And probably some diapers and gas cards and cookies, if I know my congregation.

This afternoon I was waiting outside the church entrance with the parents and some of the kids in our children’s choir.  They are on their way to the local university to be real-live subjects for college kids studying to be music teachers.  It’s become an annual outing, and the kids love it.  Riding light rail, going to college, performing for young adults, plus pizza and a movie at the end.  Woo hoo!  Good times.

So we’re outside waiting when a man who is obviously homeless starts coming down the sidewalk.  “Obviously homeless” – that’s telling.  And judgmental of me.  And descriptive.  He had scraggly facial hair, random layered clothes that were stained and too loose.  Shoes that have seen more than I have in my lifetime.  He had that look in his eyes that made me want to usher all the kids inside.  But I’m trying to be a role model here so we stayed and acted non-anxious.

He catches my eye and says something to me that I think is “what time is it?”  I don’t have a watch or phone, and tell him I don’t know.  He asks another mom there “what time is it?”  She tells him 3:30.  He says something else, and she is patient and kind and says, “I’m sorry, I don’t know.”  Then he sees my husband, the co-pastor with me.  He goes nose-to-nose with my husband, tricky because there is a cigarette (unlit) dangling out of his mouth.  He gets a bit belligerant, and the kids notice.  My husband very patiently, very calmly starts to move him along the sidewalk while the rest of us do usher the kids inside.  Now my daughter is beside herself, worried that this man will punch her dad.

My husband comes back; he’s fine.  He comforts my daughter.  The kids all want to know about his guy.  What’s wrong with him?  Why did he act that way? I am blessed to have great adults around.  We say things like “his brain works differently”  “we don’t know what he thought he was seeing” “he’s someone who needs help”.

I don’t even know how to draw a lesson out of these encounters, except to say that many people wander, but not all of them are lost.  But some of them are lost, and have been for a while, and it will take a lot more than cookies and kindness to help them find their way home.

I don’t remember much about being seven, but here’s what I do remember:

That my teacher, Miss Manley, got married in the middle of the year and then we needed to call her Mrs. Dwyer.  She invited us all to her wedding, and I wore my sister’s hand-me-down blue dress with the pretty ribbon on the front.  My best friend Jeanne asked me to wear that dress for her birthday, but I forgot. 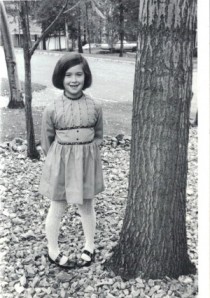 I remember playing Lost in Space with Carolyn and Cindy, the two girls who lived across the street who were both a year older than I was; I always had to play Penny because I was the youngest, but I really wanted to play Judy.  I also remember the smell of the Avon girl’s “lipstick” – sort of chocolate-y and cake batter-ish.

I remember my little brother was born when I was seven.  I don’t remember the exact day he came home, but I do remember being annoyed when he would cry in the middle of the night and wake me up.  (Our relationship has improved since then.)

That’s really about all I remember.  We moved from New Jersey to Texas when I was eight, so it’s easy for me to differentiate years.  But I don’t remember much, which bothers me ever so slightly because my daughter just turned seven, and is navigating new landscapes every day, landscapes that bear no resemblance to anything I remember from that time in my life.

She loves screens – computer screens, tv screens, Iphone screens, and we limit her.  When I was seven we had one black and white tv with an antenna; watching Mutual of Omaha’s Wild Kingdom followed by the Wonderful World of Disney on a Sunday night was a big deal.  Now, we DVR things when we can’t watch them live, or she watches things again and again, while we try mightily to limit all the screen time to under two hours, just like the Wise People say we should.

Life is VERY dramatic for her.  She weeps – weeps- when she forgets to bring back her library books, weeps when she has to brush her teeth in the morning.  She is highly put out when the teacher rearranges the seating and she has to sit by Guy, who is annoying, and Ivan, who is distracting.  She is smart-mouthed and sassy, and when we enact the natural consequences of her bad choices, she sobs again.  We don’t spank her, mostly because I don’t think we could.  I remember only getting one spanking when I was little, for something we did when we went to Baskin Robbins.  To this day I have no idea what I did wrong; there was no connection between bad behavior and the spanking consequence, so that may have factored into our choice not to spank.

She dances.  She has moves that come out of some innate musical creature in here that just naturally gets the inference and mood of a song.  She invents steps.  She shakes her bum in a way that could bring Child Welfare out, so we only let her dance at home.

At seven, she has already figured out the Mommy Guilt card.  I don’t think she is actually trying to make me feel guilty, but she is quite articulate and expressive about her displeasure that I am always at work or at a meeting or something.  My mom stayed at home with us four kids, which is a different kind of a struggle, but I don’t remember even wishing she was around more.  (Nor do I remember wishing she was around less.)

She’s seven, and the world isn’t scary yet.  Strangers are still just potential friends and not threats.  She still believes in Santa Claus, though she’s a little more suspicious about the Tooth Fairy.  She still gets lost in her imagination, playing for hours at a time with her Polly Pockets or stuffed animals or those Little People she just won’t give away yet.  To her, the words “fart”, “poop”, and “chicken” are the most hilarious words in the English language.

She tells me I’m the best mom in the world, and that she loves me more than  a chicken nugget, and that she will go to the local community college so that she can live with us forever.  That will change.  But for now, while she’s seven, I’m glad she loves us so much and so freely.  Everyone should have a seven-year-old in their life, if only to remind them how fun and complex the world is.