The poplar at the end of the block – thought by some to be the tallest poplar in the state – has lost its leaves.  It’s an upward reaching tree, and it looks a bit forlorn, though that could be some transference on my part.

There is something plaintive about it; the trees look as though they’re beseeching their sky-god for help.  It looks like beseeching and not praising, but as I said, there could be some transference going on there.

On election night, as the map of the U.S. turned more red than blue, I said one of those beseeching Hail Mary (the basketball kind, not the rosary kind) prayers.  Oh God, please, change this, I yelled in my head. As it turns out, God is not some genie in a lamp whose belly I rub and my every wish and prayer are answered.

For me, for my political and ethical sensibilities, for my understanding of the call of the gospel, this election and its aftermath has been hard and wrong.  But it has revealed the architecture of some things: my own prejudice and assumptions, as well as my faithful and ethical grounding; it has revealed branches of my fellow citizens whose worlds and attitudes are completely unknown and foreign to me.  It has revealed nests of strength, of protest and compassion, that may have been hidden, and dead branches that need to come down, like racism and misogyny and xenophobia.

So I find myself confessing a lot more, and seeking humility.  I find myself trying to be more brave and trying to reach out to those so different from me.  I find myself weeping still at times, and getting worried and angry.  I am hopeful too. One day those leaves will grow back on the poplar, sometime this spring. Until then I will appreciate the branches.

More than that, I will appreciate the strange village that has emerged at the base of the trunk.  Some time this past spring, the people who live in the house by the tree put a little gnome and door and a little fence among the roots.  Then one by one, other things appeared. Another gnome.  A miniature rope ladder.  A swing, then two. A few dinosaurs.  A pterodactyl.  Frogs.  A fort.  Some cowboys. 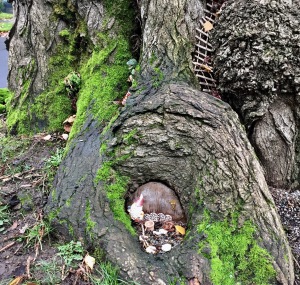 As plaintive as the branches are, a mismatched village of the whimsical and strange stands at the base of those branches, a counterpoint to the narrative of barrenness and beseeching.

There is always a counter narrative.  It may not get heard, it may not be remembered in history, but it is whispered among the powerless and the planning.  It is repeated by the protesters.  It is spelled out in the unfolding leaves of spring.

At least that is what I hope. 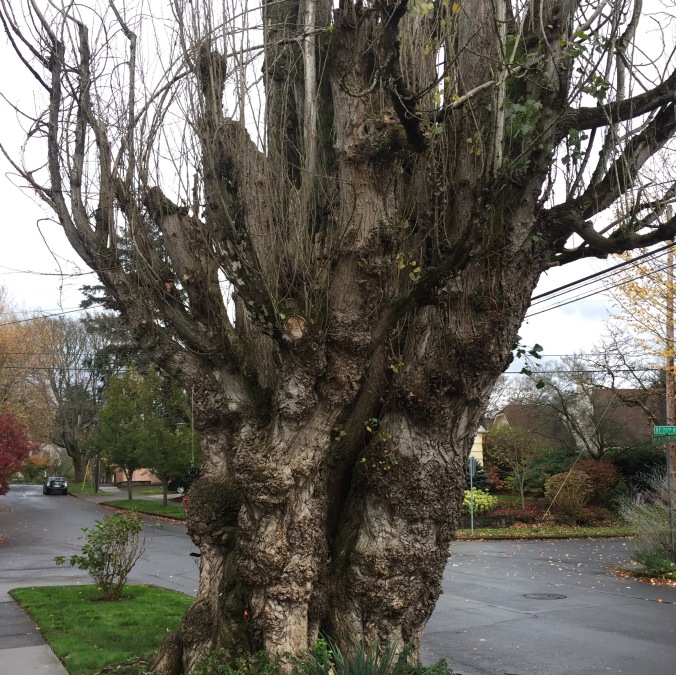