“I wonder who he’ll go see first.  His sister, maybe, or his best friend.  His parents? Maybe.  Or his in-laws.  Or maybe he’ll look for one of his heroes.  But I think Dad will see his sister first.”

I indulge myself in those sorts of thoughts occasionally, setting aside everything I ever learned about theology and Biblical exegesis.  I miss him, so I allow myself to envision my dad wandering around the cloudy expanse of heaven, finding the people he missed so much, those whose deaths left a void in his life, a void that is now gone.

I think that for myself, too – whom would I seek out?  Dad, obviously.  And my aunts, grandparents.  A college roommate.  A woman named Joanna, from the first congregation I served, whose unexpected death after ten awful days of waiting still strikes me to the core.  My cat Bud who was as precious to me as any person.

I don’t know what heaven will be like, if there is a heaven and if I get there.  But I’m not ready to let go of these people, so I cling so tightly to this idea that there is more that awaits us beyond the grave.  Many people I know don’t agree with me on this point, and that’s okay.  I mostly believe in a physical afterlife, and many people I know who believe there is something beyond the grave don’t agree with me  on that point.  That’s okay, too.  None of us will know till we die.

A wise friend of mine, who’s kept track of my grieving, shared that she thinks the second year after losing someone is harder than the first.  I’m testing out her hypothesis.  It feels like Dad has been gone a long while.  The year of firsts is over, but now it’s the year of seconds – the second birthday without him, the second Christmas, the second anniversary.  And that will be followed by the third and fourth and tenth and twentieth. Each anniversary is just a reminder that he is gone, I’ve lost him, he’s not coming back.

So I let myself imagine I’ll see him again, and I imagine he’s having a great time, and he doesn’t miss us because time is different there in heaven, and he’s catching up.

Maybe this is about grief.

It is about grief.

But it’s about love, too – wanting good things in life and life beyond death for those we have loved.  So I hope he has reconnected with his sister and best friend and parents and everyone.

On my dresser I have a little shrine to Dad – a photo of him holding my daughter when she was a baby, at my brother’s wedding.  The frame is flanked by a bottle of Royall Lyme, his aftershave of choice, and a small carved UCLA Bruin.  In front of the frame is a little plastic tray he brought me from Bermuda, and it holds a pocketknife with the emblem of a bank he once worked for.

I say good morning and good night to Dad every day. He doesn’t say anything back.  But I like to think that some day I’ll see him again, face to face, and we’ll say good morning to each other, and this heart of mine which has been cracked up a bit will be all mended up.

Love and grief; what a strange dance they have this side of the door. 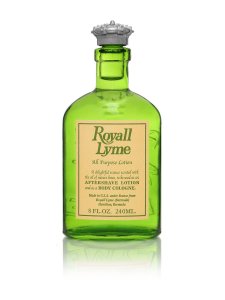